For the units 6-7 assignment you will be required to build and train a neural network to recognize letters of the alphabet and numbers based upon their design using a seven segment display where each segment of the display is one input into the neural network.

Using the numbering for the segments in the previous figure as the inputs into your neural network.  You are welcome to use any network design that will accurately solve the problem.   In this case your network must be able to identify the letter or number based upon the pattern of segments.   For example if the segments 1,2,3,4, and 7 are lighted then the pattern would represent the number 3.  The number three must be represented as a binary number that is the output of the neural network.

Not all of the letters of the alphabet can be accurately recognized.  The following chart represents the numbers and letters that your network must be able to recognize with the exception of letters S and Z which cannot be distinguished from the numbers 2 and 5.

The output of your network will be the ASCII code of the letter or number defined in the following list and represented as binary.  Since the largest number is 72 you will require 7 outputs to represent any of the 7 segment numerals.

We are using a 7 segment display to recognize letters and numbers, however it is important to know that we could use the same approach to recognize virtually anything.   We are using a 7 segment display because our simulated neural network only has the capacity to accommodate 10 input values.  However if we had more input values we could recognize any handwritten letter or number.  Consider the following examples example.  Assume that we had a matrix that was 16 x 16 (total of 256 point) and each of the points were an input into our neural network.  Further assume that we could overlay a hand written letter or number onto this matrix.  Every pixel that was colored by the letter would have a value of 1 and any pixel that was not colored would have a value of 0. 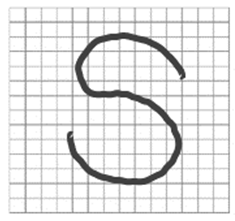 Using this as input we could easily train a neural network to ‘recognize’ various hand written letters.  As the amount of training increases the accuracy of the network to detect similar letters that might not have the exact same shape (but a similar one) would increase.

Let’s consider another example.   Assume that we had a neural network and instead of the inputs being 1 or 0, we had the ability to determine a value between 0 and 1 as input where 0 was the color white and 1 the color black and shades of grey as values in between 0 and 1. 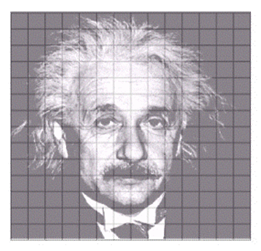 Using this approach we could train the neural network to recognize faces, people, and objects … such as Albert Einstein here.  In practice, facial recognition software will typically limit the amount of ‘features’ that are used as input to the neural network to areas that have the greatest predictive power such as the position of the eyes, nose, mouth, and perhaps chin, but the principle remains the same as the network that we will build to recognize the letters in the 7 segment display.

To complete this assignment, you will need to download and install the Basic Prop neural network simulator.  Basic Prop is distributed as an executable Java Jar file.  You can either execute the file on your local computer or you can access the simulator in the Virtual Computing Lab.   To run the simulator on your local computer you will need to have the Java JRE (java runtime environment) version 1.5 or greater installed on your computer.

The simulator can be downloaded from the basic prop website at the following URL: http://basicprop.wordpress.com/2011/12/21/introducing-basic-prop-a-simple-neural-networ/

As part of the assignment you will need to create a pattern file for the 7 segment display input data.  You can see an example of a pattern file on the basic prop website.

I have provided an example of a pattern file below.  In this case I have set up the pattern file to teach the neural network to add two binary numbers.  Notice that the first set of digits is the input value in binary.  The second set of digits is the output value of the network.  Notice how in the first set of digits I have 0 0 0 0 1 0 0 0 0 0 1 as input.  In this example which adds two numbers together, I have defined the input as two binary numbers each 5 digits in length (in the first example the two numbers are 1 in binary).  The second set of digits are the output of the network in the example it would be 2 in binary (0 0 0 1 0) ….1 plus 1 is 2.

The network is then ‘taught’ to add the two numbers together.

NOTE: You will have 2 weeks to compete this assignment; it will be due at the end of Week/Unit 7.